My husband and I are gobsmacked. Stunned almost into silence. We have just found out that the son of a friend of ours, is no longer vegan. This chap had quite a following on Youtube, championing veganism, interviewing vegan strong-men and generally trying to persuade the world that eating meat is a sin, against animals, our health and the environment.

We haven’t talked to him directly yet…but we know that, following his first degree, he is now studying for his Masters degree in Nutrition. Suddenly, he is not a vegan. He’s not a vegetarian either….he’s…an…omnivore…(eek!!), who eats a small amount of organic meat (the best kind of omnivore in my opinion). He has recognised that those nutrients we get directly from meat cannot be readily obtained/taken/absorbed from a vegan dietary regime. This is an extraordinary turnaround…he has lost some vegan friends (and probably most of his followers). So this turnaround, this recognition that he might have been wrong, comes at some personal expense. It also goes entirely against the currently popular vegan tide of opinion, which holds, with religious fervour, that animals are being mis-treated (they are) and that the over-consumption of meat is linked to the destruction of our environment (it is)…ergo, we must entirely stop eating meat. I applaud him…cos it takes some considerable strength of character to do this…to come down from a staunchly-held position and admit that you may not have got it entirely right.

As I write, husband, niece & nephew are on the anti-Brexit march in Trafalgar Square. And I’m only writing this because I think it would be good to record what I felt about Brexit at the time it was happening. I am a Remainer. I’m a Remainer for several reasons…not least that I am convinced that, in all but the most dire of circumstances, we are better together. I’m pretty certain we will leave the European Union. But I’m curious about the reasons Leavers give: (non-democratic; costs too much money; Tower of Babel/the goddess Europa is somehow linked to the devil as stated in the Book of Revelations!). I’m just not convinced by these reasons…they ring hollow, as some kind of justification which is hiding reasons or feelings that are perhaps not readily sayable or justifiable. I’m convinced that Leavers don’t really know exactly why they want to leave; and it really doesn’t matter that they (and Remainers for that matter) were fed lies by politicians and the press before the vote in 2016. It really doesn’t matter…because they just want to leave. And (and I’m sure there may be commentary on this elsewhere), the real reason is fully fear-based – it is to do with a perceived threat to their values and of who they are, and their place in the world (which they may see as diminished due to loss of empire)…and a threat to our sense of self and as determiners of our own destiny (even if that destiny is a ditch…at least we will have chosen it). The fear is stoked by the news media, linked with those in positions of power who stand to gain from creating a deregulated, isolated UK – loosened from the protective aegis of the EU. The fact that things have changed/moved on and our situation socially and economically is vastly better than it was before we joined the EEC (as it was then) 40-odd years ago, is of no consequence, if, (for whatever reason), you feel diminished or you feel yourself/your values are under threat. I have a theory that the now deceased Osama bin Laden has nevertheless won (at least for now)…as his actions led to the mass migrations of refugees and terrorism that (along with the press) fuelled the levels of fear I believe these folk are feeling.

I’ve recently read a new explanation of the reasons why Homo Sapiens is still here and Neanderthals are (for the most part), not. (https://www.theguardian.com/science/2013/jun/02/why-did-neanderthals-die-out)….in summary, the latest opinion on this says Homo Sapiens developed a stronger pre-frontal cortex (front part of the brain linked with reasoning), which assisted complex thinking and possibly language…which led to stronger, larger social networks across Europe. Neanderthals simply didn’t have these geographically larger social networks…and therefore no back-up in times of crisis.

The EU appears to be saying that the door will always be open if we want to come back. If we do, at some later date, it will be under far, far less advantageous terms than we have now. It may be time for Leavers to re-think their entrenched position, time for a turnaround…but I think the momentum is against it. Will we become the western outpost of floundering Neanderthals?…I hope not. Time will tell. 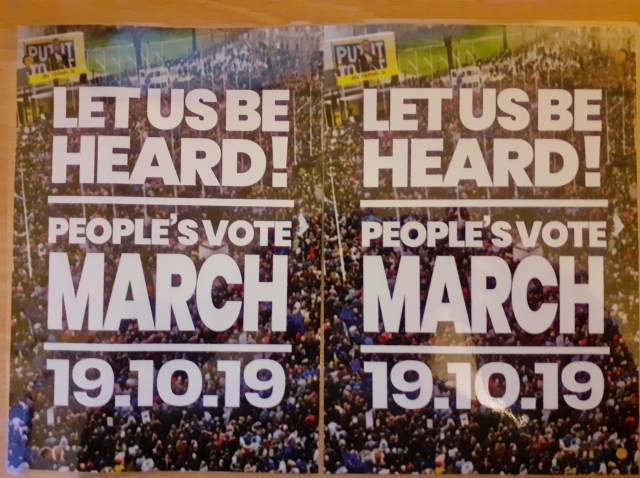 Who am I?.......well, I'm getting to that age where I have to think about that before I answer... My name is J, I'm married to Jay and we live in the great city of London. I started this blog as an update to family and friends when I completely ruptured my Achilles tendon a few years ago (see The first post). I am so fortunate in every possible way...and in all honesty, I'm just using this blog to remind myself... Why is it called Ain't we got it made?: this is a line from one of my favourite songs (Sing Baby Sing - https://www.youtube.com/watch?v=TtTgtkDLNys). Have I got it made? Well - I've got a roof over my head, running water right into my house, a fully-stocked supermarket round the corner, free and readily available healthcare; and I live with my lovely husband in a great city, in a beautiful country, where I feel safe and secure.... I rest my case. Fact or opinion: I am not an expert on anything… but I can confirm that everything in this blog is either fact or opinion. I hope to post regularly, mostly about things I find uplifting, positive, amusing, optimistic, important..or perhaps just about regular daily life...but I won't bother you too much. Thanks for stopping by... jx
View all posts by aintwegotitmade →
This entry was posted in Brexit, Politics, Prehistory, Uncategorized and tagged Brexit, changing your mind, Veganism. Bookmark the permalink.